Kids enjoy outdoor sports with their friends more than anything. It not only keeps them active and engaged but also lets you chill with your buddies during get-togethers.

If you’re looking for some game ideas for your kids which will please them, and engage them into mental and physical development, this article is written for you.

Below, we’ve noted down some of the most entertaining games for kids which are safe, cost-effective and engage the kids into a great thrill. Let’s take a few minutes from whatever we’re up to, and go through the whole list-

Click a link below to jump to the relevant section

It’s a pretty funny outdoor game, where a theme party takes place with kids dressing up like pirates, princesses, sports or many more. You need to set a course of the obstacle on the ground. Next on, you have to divide the group of kids into two or more teams. Put on an item at each of the marker obstacles, and let the kids pick up and replace the items from the market.

Games like this inspire teamwork, competition, physical movement and activeness of the kinds. It’s a fun outdoor party game and can be executed by any parent on any space.

I won’t lie, my husband and I love water sprinklers just as much as our kids. If you have a sprinkler in your backyard, here’s a fun and creative summer game suggestion: play Rainbow fill. Give each kid a small plastic bowl which they have to wear like a hat near the sprinkler.

The goal is to fill the cup with the sprinkler as quickly as possible, run to a large bucket placed near the finishing line and fill it up. Whoever fills the bucket to the brim first wins the game.

This game is a great way to keep all the kids in the house engaged at the same time without fighting for their turn. Plus, as we all know, running to and fro is a great form of endurance training which keeps the heart and muscles strong.

A funny and quite hilarious game for kids is Find the Gummy Bears. Thing you’ll need for this are cool whip or whipped cream, a gummy bear and plastic made plate for each of the kids.

To start the game, give each player a plate piled with cream. In the cream, there would be 3 gummy bears hidden inside. The first person to find all the bears will be the winner.

By the way, no using of hands allowed. Sounds more interesting now? 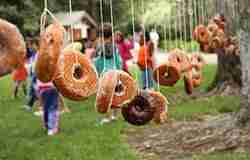 I’m sure that you’ve seen this competition at least a few times to take place in your pre-primary school. This is basically a party game where kids will be in a competition to eat up donuts from a clothesline. No hands are allowed to sed, and the donuts will be on a motion. The motion won’t be anything super hard for the kids to catch up, but the kids will get provided with an extra thrill in this way.

If you consider it as an option, adults can also take part in this game and take the fun into the next level.

If the number of kids is pretty less in the yard, you can try out this game. You can start it by placing a wooden dowel at the center of the lawn. The kids will be having their own hula loops of different colors.

If there are three or four kids, you may assign different colored hula loops to different kids. In this way, children will have their own color codes, and calculate the scores at the end of the game.

Most little girls love playing house with other kids as well as with their parents. It’s a safe and fun way to let the children unleash their imagination and creativity. You can buy a pre-assembled outdoor playhouse that matches your child’s interests and fits your budget.

Let your kids decorate the house, set up the props, toys, assume their roles, come up with stories, and plan out the activities for the game. The playhouse can be your child’s private space where they can enjoy an amazing interactive experience and learn a great deal about how the world around them works.

7.Who Can Steal the Bacon?

It’s quite an exciting game, specially for kids around 8-12 years old. It’s more of a race where each of the players will have a target to catch up a piece of bacon. They will start from a starting line, and the bacon will be at the finishing line.

Throughout the game, there are several skills that kids can develop. There can learn how to pay attention, improve reflexes, and how to move physically faster. This game is quite exciting where each of the kids will have two balloons attached to their feet. As you can see in musical chair games, the kids will walk around a circle until the music stops.

As soon as the music stops, the kids will try to stomp ballons of each other. In the end, the kid with both two balloons attached to their feet will be the winner. This game will help in many ways to enhance their interactions, movements of the limbs and many more.

Another funny outdoor game with balloons. When it’s hot summer, playing such a game on the water would be a great idea for kids.

In the game, kids will take a turn to toss their balloons and the movement will be in a back and forth style. You can create a few teams among the kids, and each team will try to toss the balloons of the other teams.

In the end, the team with a maximum number of un-tossed ballon will win the game. Instead of balloons, you can also use homemade sponge balls as well.

10.Musical Chair on the Patio

If you’re right on the lawn or patio and make some fun out of a game, musical patio chair is the ideal game to play. As you know, the rule is to eliminate one player at a time.

A set of chairs will be arranged in a circular manner, and kids will be on the chairs. As the music starts, they will start passing something(pillow, ball) to each other. When the music stops, the person with the ball in hand will be eliminated. In the end, the person remaining in the game will be the winner.

So, that was the list guys. Hopefully, you’ve picked up the games from the list, and going to play them with your kids in the next outdoor day out. Good luck to you and your kids!

Hi, I’m Alvina Emmy, a full-time mother of two gorgeous kids and a part-time blogger.Parentloves.com is my humble attempt to lend a helping hand to all those new parents, soon-to-be parents and caregivers who want only the best for their kids.
Powered by Parentloves
As an Amazon Associate I earn from qualifying purchases.
0 shares